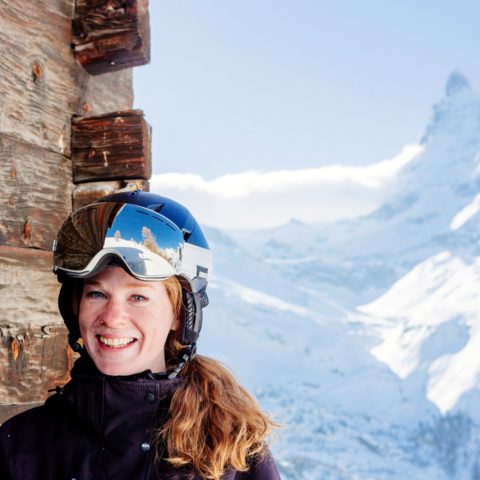 Caroline comes from a vast background in sport; playing, coaching, umpiring and mentoring. From an early age she became qualified in various sports and as she progressed through the ranks of the clubs became a mentor for young coaches and sports leaders starting out on their coaching pathways.

After studying BSc(Hons) Sports Coaching and Sports Education at the University of Gloucestershire she worked in sports development in South West England providing sports services, teacher training and nationally-recognised sports leaders schemes as part of the work from Plymouth School Sports Partnership. She also has a background in adaptive sports and working with people with disabilities.

Unusually for an instructor, Caroline first put on skis at 18yrs old on a chance family holiday. From that moment she was hooked! During the years working in sports development she spent holidays and a winter season working for luxury family travel company Powder Byrne; gaining experience in the ski industry. Since then she has spent the majority of her time in Zermatt.

She was the first female trainee to go through the Subzero Coaching ISIA Level 3 Course. Through the years, beside obtaining her Level 3 with BASI, she also became part of IASI, for which she attended the Interski Congress 2019 in Pamporovo as researcher member for the Irish Interski Team and after passing selection and training in 2019 became a Level 1 Educator and Examiner for IASI.

In the summer she still keeps up the sports coaching in the UK as well as working as a professional nanny. In the winter she supports Federico with the Strength and Conditioning services in Subzero Coaching.

Caroline also contributes to the ski coaching of the Autumn and Winter Gap courses, as well as being the point of reference for the trainees as course coordinator.