In this ski boots guide we will split the products on the market amongst these categories:

Alpine boots, or downhill boots, have a stiff plastic shell designed to hold the foot and ankle firmly in position.
The outer shell of downhill ski boots is constructed of a tough polymer or thermoplastic, such as polyurethane or Pebax®. 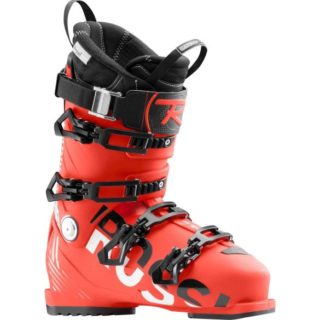 Alpine ski boots have a pivot point near the ankle that allows the upper shell to flex forward slightly, making it easier to initiate turns.
The flex rating of a boot refers to its stiffness or how difficult it is to bend. Recreational skiers would look for a boot between 60-80 flex, with heavier or advanced skier looking for a higher flex. Expert skiers tend to use around 120, with race boots for adults around 130-150 flex.
Liners are designed to protect feet from the cold and absorb vibrations, and are a common point for customisation in order to get a more personalised fit of the boot. Some boots also have a ski-walk switch. They are designed to be used with alpine skis and bindings, which secure both the toe and heel of the boot.

Racing ski boots are the same design as an alpine ski boot but stiffer.
The ankle and foot are held very firmly in position to support the joins at speed when experiencing huge forces put on them. The fit is generally much tighter than an alpine boot and is customised to the skier and their biomechanics and physiology. 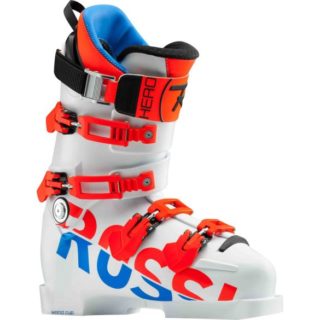 Wearing a boot that is too stiff can negatively affect a skiers technique as not being able to bend the boot will affect the stance and limit the movement of the joints vital to skiing, so the advice of a professional boot fitter should be sought.

Freestyle boots are designed to cope with intense spinning and jumping motions without limiting movement. Frequently a freeride boot has a softer flex for forgiveness in tricks and landings in the park, and have good shock absorption for the same reasons.

Traditionally, alpine ski boots have three to four buckles.
Buckles on the shell lets the skier adjust the way the boot fits in specific areas. Having two or three buckles means a freestyle boot is less restrictive whilst still maintaining a good fit and position. The alternative is a cable system where a loop of cable is fixed in place around a hook on the other side of the boot, permits precise control of the fit of the shell and avoid pressure points.

Lightness is the crucial factor in a touring boot. Made to be as light as possible, the flex of the boot is what sets it apart from an alpine boot where movement is strictly limited.
Most boots have a walk mode or touring mode that can be toggled on or off using a small lever. The walk mode frees the movement between the foot and leg sections of the boot and makes the boot flex more easily during ascents and touring on flat terrain.
Touring boots also have a rubber outsole for traction when walking in the snow which make them unsuitable for use with a normal alpine binding as the rubber interferes with the release mechanism.

Follow the link to read the Skis Guide article!

This Ski Boots guide article was written to prepare participants towards the lecture on Ski Equipment that will be held during the IASI Coaching Theory. The lecture itself will focus on how the boots are made and what to consider when purchasing a new pair and what to take in cosideration for a customized fit.