This article was written to prepare participants towards the lecture on Ski  Equipment we run every year for the IASI Coaching Theory. For dates of this course you can visit the page here.

If you are an instructor looking for your next pair of skis please visit the dedicated page here. Find out more about the Subzero Ski Line, developed to create the ideal ski for ski instructors. Hand made in Italy, developed in Zermatt and available to ski instructors directly from the factory at special rates!

Skis come in a wide variety of shapes, sizes, lengths and widths. The dimensions influence where the ski is going to perform best, and slight alterations mean a big difference in performance.

There are a whole host of technologies being developed, all of which claim to absolutely impact the ski and many different materials used in innumerable combinations, but let’s start at the beginning by looking at the classifications of skis.

Racing skis are the stiffest and arguably the most difficult skis on the market to use. Aimed at expert skiers and professionals they are generally narrower around the waist/ binding, heavier and more rigid. The heavier weight of the ski is vital to help the grip on the snow, especially at speed, which means more stability when changing direction.

Slalom and GS skis are seen in the retail market for expert skiers but will be difficult to use for those not quite ready as the skier will not be able to bend the ski. There are exact regulations from FIS on the dimensions of the skis but generalisations can be made.
Racing skis are under 65mm underfoot.
Slalom FIS skis are min. 155 cm for women and >12 meters radius, for men they have to be min. 165cm in length and >13 meters radius.
GS FIS for men have to min. 193 cm in length and 30 meters radius. For women, 188 cm and 30 meters radius.
SuperG and downhill skis are much longer to provide stability and much higher speeds with less emphasis on the radius being an influential factor in the ski as the turns are of a different, much longer nature. Here are all the sized allowed to be used on FIS competitions: 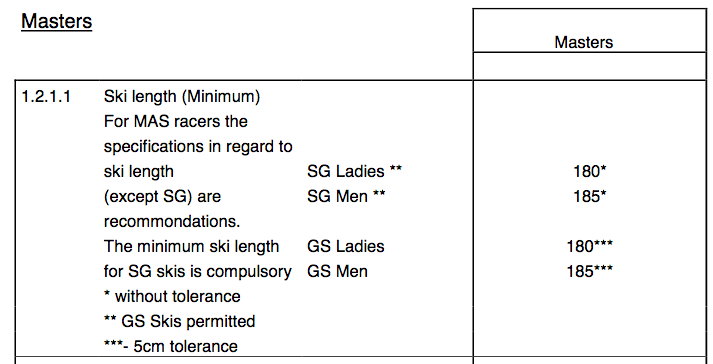 The type of binding is important with a racing ski as are heavier to withstand the forces generated in the turns and have a race plate underneath. Again there are FIS regulations for competition for the 2017/18 season.

On piste skis can be described as a toned down version of a race ski; designed for cruising on groomed terrain and intended to be carved. The hourglass shape makes them easy to turn, especially when a skier learns to bend the ski in order to utilise the side cut and edge of the ski. The general dimensions are 65-80mm underfoot and tips / tails being around 100-110mm. Higher end models will be stiff from various construction methods intended to be stable at higher speeds and on hard-packed snow. There are plenty of more forgiving, softer flexing skis for skiers who prefer a steadier pace but still capable of holding an edge. In this category we can probably find the best skis for ski instructors.

Some manufacturers have started to move away from promoting purely freeride, powder-seeking skiers and recognise the skill and enjoyment of a perfectly executed turn on the piste.

All mountain skis do exactly what they say on the tin; they go all over the mountain. They generally have a radius of about 16 to 20m, with a medium stiffness, medium width on average between 80-90mm underfoot, and even a medium length compared to other styles of ski. Having these sort of properties means the ski is versatile and will not be too punishing in any particular condition. Not too wide to carve on piste, not too narrow to play off-piste, not too stiff to be difficult in bumpy terrain, not too soft to be unable to hold the edge at speed.

A common discussion point amongst ski testers is exactly what is an all mountain ski. As an instructor I have a preference to the more piste-orientated ones as they suit more of my clients requirements. Something 95mm underfoot is too wide for many to use properly on groomed terrain and dislike the instability of not finding the edge but a fellow ski tester who comes from a touring background disliked anything below 90mm underfoot claiming it to be a piste-only ski, useless in the powder as it does not have enough float.

Because of this lack of definition even between professionals all mountain is often split into two subcategories. Frontside is aimed at 60/40% ratio on piste, with backside spending more time off the side at 40/60%. The choice of ski will depend on the skier and their preferences of where to ski and how hard they want to work.

Freeride is the term used for any ski designed to be used off-piste, otherwise known as powder, backcountry or big mountain. They are normally long and wide, < 90mm underfoot as the greater surface area of the base increases the float of the ski. They normally have a large radius although it is not really important in the powder, and are generally quite flexible to allow the ski to bend and make shorter turns, although the flex can vary a lot between skis. Tip rockers are common to enable easy turn initiation and allow the tips to float in the powder thwarting the classic head-over-heels moment if tips dig into the snow. Often the tails are rockered as well to prevent them catching, or a camber shaped ski has a rise in the tip, tail and underfoot to give the ski more spring, maneuverability, responsiveness and a fun ride.

Freestyle skis, otherwise known as twin-tips are skis intended for use in the snow park. Designed to go backwards as easily as going forwards the majority of freestyle skis are rockered at both ends for the skier to jump, spin and grind whatever they can find. Often lightweight, the weighting of the ski is different to a traditional piste ski in order to spin and turn easily and the flexibility is forgiving on landings, with some skis being completely bi-directional. Bindings are generally mounted centrally, further forward than most skis.

Twin-tips are sometimes used as an all mountain ski because of the soft flex and tip rockers and some perform well but many manufacturers and industry professionals do not recommend them for all mountain use.

The main purpose of a touring ski is that it is light. Really light. Walking uphill is tiring anyway so manufacturers use materials and construction methods that reduce weight in every possible way. Light and narrow skis perform better uphill, with a wider and heavier ski handles difficult snow better. Some brands have skis with specially designed slits or holes in for easier skin attachment and the option for pre-cut skins designed precisely for that particular ski.

Some skiers choose to use a lighter freeride ski and mount a touring binding, accepting the extra weight of the ski in preference to a better performance downhill. The binding choice is crucial when it comes to touring as it adds significant weight to the ski, can be either a frame or pin binding, and releases the heel to walk up and clips the heel back in for descents.

Follow the link to the Ski Boots Guide for the second part of this article!

This “Skis for ski Instructors” article was written to prepare participants towards the lecture on Ski  Equipment that will be held during the IASI Coaching Theory. The lecture itself will focus on geometry and construction techniques, as well as on what to take in consideration when choosing a ski for ski instructors exams.